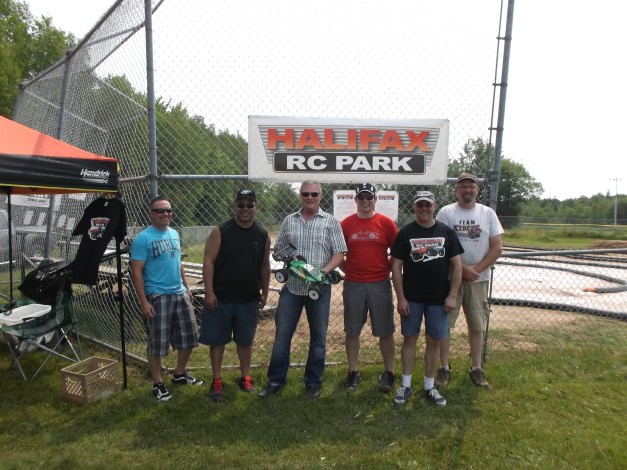 Its official, we have a place to enjoy our hobby. The Halifax RC Park had a very successful and dusty Grand Opening. Many people were on hand to celebrate the first free public access RC Park in Halifax. It has been a long journey to get us to this point. It would not have been possible without so many people in the community willing to get involved and help out. So, a big thank you to the current Halifax RC Park Committee which consists of Rhodri Amour, Todd Connolly, Pierre Plante, Jim Chapman, Donnie Hall, Charlie Deveaux and myself (Adrian Parsons). The efforts of former members is not to be overlooked either, so a big Thank you to Steve Taylor, Kelby Ernest, Doug Davis and Clint Griffin. Also, Thank you to all of you that have attended any of our work parties.

The support from District 15 Councillor Steve Craig has far exceeded any expectation I would have had for anyone that holds a public office.  He has been a true believer and supporter from the start and his contributions are not something that will be forgotten anytime soon. Thank You Steve. We also want to Thank Councillors Tim Outhit, Matt Whitman, Barry Dalrymple, and Brad Johns for their support of the project.

Thank you to Ann Wambolt and Brenton Heighton. These two have work very hard helping us to navigate the policies of the city of Halifax into a reality at the RC Park. We look forward to continuing to work with them in the future.

Thank you to all those that attended and ran some laps and those that came out to lend support for others. We also want to thank Mighty Small Cars and Maritime Hobbies and Crafts, the local hobby shops for their support and donations.

I feel like the biggest Thank you goes to the “Track Fairies”. The members in the community that came out and still continue to anonymously work on the RC Park to make it better. Paula, Darcy, John, Brian and Geoff are just a few who I have figured out and there are a few more that continue to fly under the radar. When the Committee gets to the RC Park with a work plan in hand and finds that one of the Track Fairies has already taken care of the track, it makes things so much easier, it allows us to focus on other things and really boasts the spirits of the Committee and reminds us of why we keep at it.

“There is no limit to what can be accomplished if it doesn’t matter who gets the credit.” – Ralph Waldo Emerson

Check out The Halifax RC Park at HalifaxRCPark.com or find us on Facebook.