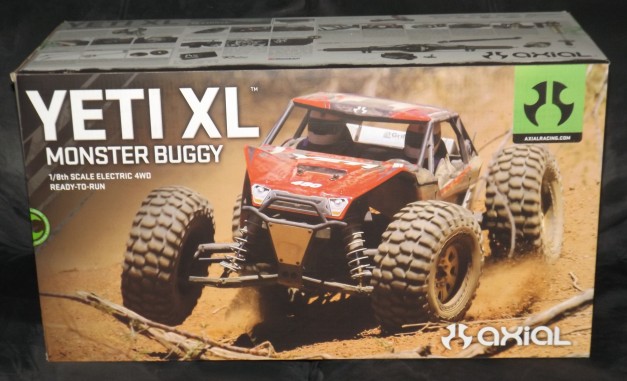 The Axial Yeti XL is an impressive looking RC vehicle, by the size alone it commands attention. It is the first of its kind, classified as a 1/8 scale Monster Buggy. Since its November 2014 release, many people have had questions, so lets take a closer look at it and see if it’s worth the $699 US price tag. (It can be found cheaper using coupons and promos offered by various sellers.)

What is in The Box

The box is huge and inside it you find the Axial Yeti XL, a 2.4ghz Transmitter, a Manual and some Parts Bags that include two extra sets of Helmets ready to be customized, Body Clip Pull Tabs (No clips), some of the Yeti XL’s include Diff Shims that need to be installed (Rumour has it the new ones already have the shims installed at the factory), assorted Shock Pistons, Hallow Balls, Body Mounts and some other goodies. 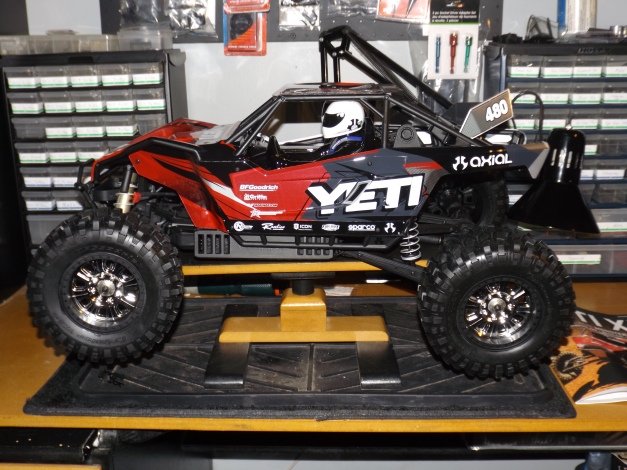 Out of the box, the Yeti XL is just very cool to look at. You should find yourself grinning ear to ear. Upon closer look, you may find some issues. Example: The left rear tire on mine was not glued to the rim at all. At that point it was time for a closer inspection. After a teardown in order to install the Diff Shims I found the Rear Diff had very little fluid in it and the Front Diff wasn’t much better. I cleaned out the Diffs and added 200 000 wt fluid. I did this in an attempt to smooth out some of the twist seen in Yeti XL videos. I then decided to check the Shocks and I found that only two of them were filled properly. I cleaned out the shocks and added 35wt fluid all around, in attempt to help settle the Yeti XL in rough terrain. 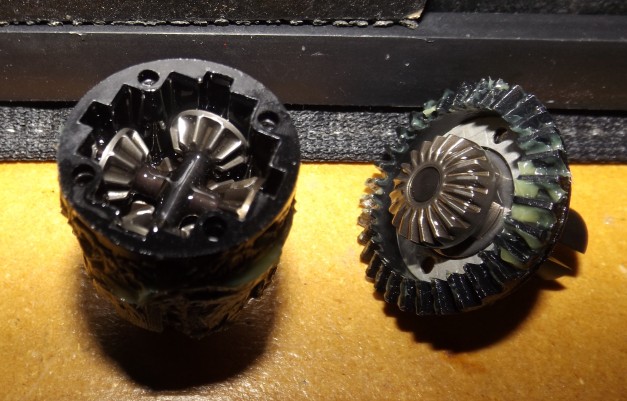 The Diff Shims, which are recommended for 6s use, were inside a parts bag and really should have been installed at the factory. The included instructions clearly show where the shims belong on the Diff, but the instructions don’t tell you everything you need to remove to access the Diffs, and the exploded parts diagram isn’t much help here either. This isn’t a difficult job, but it would be much better if it included proper instructions. A person new to Axial or someone new to the hobby may struggle trying to figure things out. 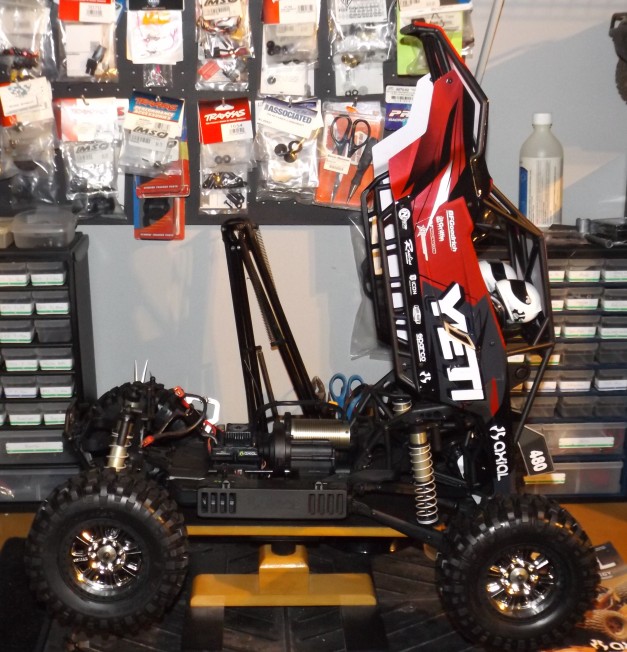 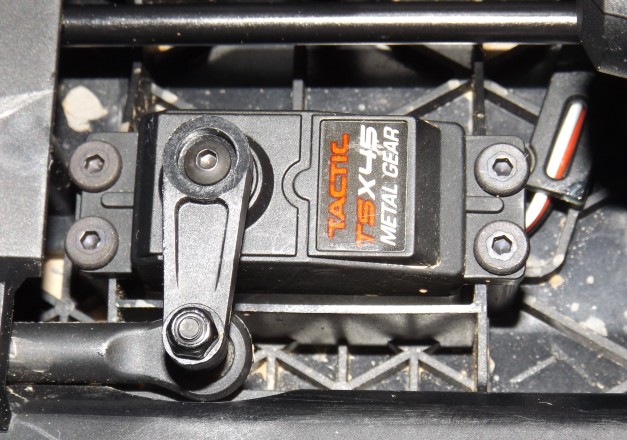 This is the same servo use in the 1/10 Axial Yeti. I find it slow and a little cumbersome; I wouldn’t expect it to hold up to the weight of the Yeti XL. It may be best to have a backup on hand to minimize down time.

These are terrible. I wish I could sugar coat it, but this set up for a vehicle this big is just sad. Axial could have done so much better here. I have no idea why they opted for 8mm wheel nuts instead of 17mm. Their current design will lead you to round off the hex eventually, no matter how careful you are when you are trying to remove them. I plan on modifying this area with the Traxxas 17mm hubs. That is just one option, there are others available.

I was actually ready for most of these areas of concern. When I did my research prior to getting the Yeti XL, I found a Yeti XL Pre-run Checklist on the Axial site itself. This really prepared me for what to expect and do prior to my first run. It is a good habit to check over your brand new RTR’s before your first run anyway. These sort of things can be found with all manufacturers.

I have only been Bashing with it and have done zero crawling. Plain and simple, The Yeti XL is a blast to drive. It can handle just about all the terrain you can throw at it. After a slight Shock adjustment, the Yeti XL jumps like a champ. Yeti XL is powered by a Castle Creations 2200KV 4-pole Vanguard XL brushless motor and a waterproof Vanguard AE-4 ESC. This setup is very capable on 4s, providing me with more than enough power for now. I haven’t had any concerns with temperatures on 4s. I don’t expect it to be a problem, but I am curious about 6s during the dog days of summer.

The steering isn’t anything special. The stock servo is the same servo used in the much smaller and lighter 1/10 Axial Yeti. I would like more responsive turning and better handling and I hope an upgraded servo will do the trick.

A day after few runs through 3″ deep water, I decided to do a teardown and check the condition of the bearings. I found the Rear Wheel Bearings very dirty and hard to turn. The Bearings on the Rear Diff were ready to seize up. The condition of the front Bearings weren’t as bad as the rear ones, but still in need of attention. I cleaned out the Bearings and packed them with grease because I plan on doing a lot of winter driving.  I also ordered another set of Bearings from Boca Bearings. Once you have taken the Yeti XL apart once, the second time is much easier and changing any broken parts should be fairly straight forward.

I love this vehicle, it is by far my favorite to drive. It has its short comings, but there is nothing that can’t be fix or modified. Aftermarket parts are now starting to make there way to stores. Hot Racing has some parts, with plans to release more. In fact they have already released a 17mm Serrated lock Nut to replace the current stock setup. The Axial Yeti XL is made with a lot of plastics and that creates flex. Some people think this is a bad thing and they want to start replacing parts with aluminum options. I plan on taking a different route. The plastic doesn’t bother me. After 6 batteries, I haven’t broken anything. All of my driving has been on 4s but I have driven it very hard, hit things and she keeps coming back for more. I plan on replacing things as they break. The plastic may be the reason this thing can take a beating, because of the flex. I don’t plan on racing this. It will be my Bashing vehicle, so I don’t need to dial in the Toe and Camber Links to exact specs, I don’t need to start removing parts to lighten the load so I can shave off a 10th of a second on my lap time. I just get to drive it until it breaks, fix it and do it all over again.

Is it worth the money? Only you can answer that for yourself. Do you mind the work you may need to do before you drive it? Do you mind waiting for aftermarket products to be released? Is it in your budget? I couldn’t be happier with it to this point. It always brings a smile to my face and I can’t wait to take her out jumping after work. I would do it again in a heartbeat. It just seems to suit me and the things I love about this hobby. I hope Axial release a kit version.

Side by Side Size Comparison

Hot Racing  and DHawk Racing on Ebay at this point are leading the way in aftermarket parts.

The Toyz offer a large assortment of Crawler accessories to add to the authenticity.